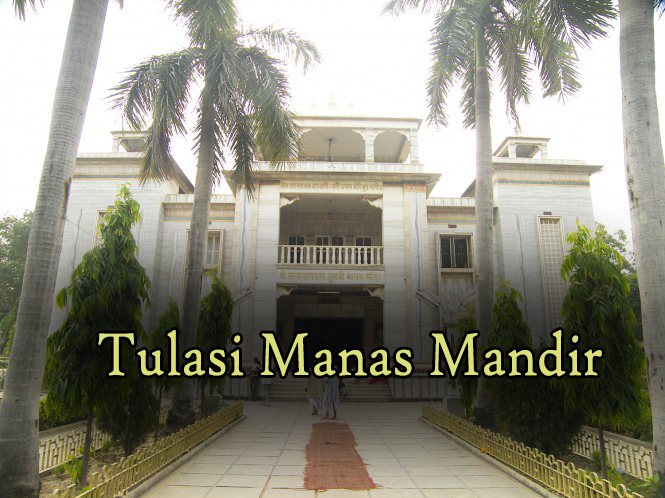 Tulsi Manas Mandir was built in the year 1964 by Seth Ratan Lal Sureka of Bandhaghat (Howrah). Named after saint Tulsidas, the temple has been precisely devoted to Lord Rama. This temple has great historical and cultural importance in Hinduism since the ancient Hindu epic Ramcharitmanas was originally written at this place by Hindu poet-saint, reformer and philosopher Goswami Tulsidas in the 16th century CE.

At a distance of 7 km from Varanasi Junction, Tulsi Manas Mandir is a Hindu temple situated next to the famed Durgakund Temple in Varanasi, Uttar Pradesh. It is one of the most famous temples of Varanasi and also an important tourist attraction of the holy city.

Best time to be in Varanasi is October – February end. Temperature dips down to chilly cold and people can be seen fully covered in woolens. Cold winds coming from Himalayas and the water of Ganges makes it a pleasantly cool place to spend days here.

The main gate of the temple has written Shri Tulsi Manas Mandir Haridwar. At the right side of the entrance gate, there is an attractive Tulsi Garden which has very calm and clean environment. The Tulsi Garden has the statue of Tulsidas which illustrates the stanza “Tulsi Das chandan ragane, tilak det Raghuvir.” On the left side of the main temple, there is a beautiful pond having four Ghats.

The temple was constructed in white marble with beautiful landscaping all around. The walls of the temple are engraved with scenes from Ramcharitmanas, the Hindi version of Ramayana. The temple has beautiful images of the Ram, Sita, Lakshmana and Hanuman. There is an attractive Tulsi Garden which has very calm and clean environment. The garden has the statue of Tulsidas which illustrates the stanza ‘Tulsi Das chandan ragane, tilak det Raghuvir.’ There is also a beautiful pond having four ghats on the left side of the main temple.