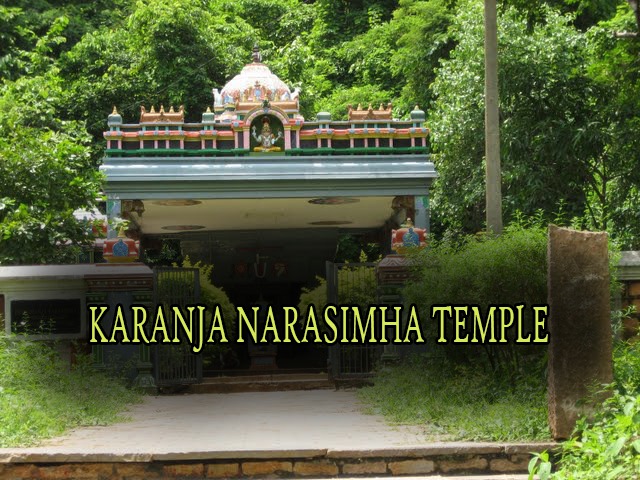 At a distance of 7 Kms from Lower Ahobilam and 1 Km from Upper Ahobilam Temple, situated on ghat road between Upper and Lower Ahobilams, the Karanja Narasimha Temple is named after the tree under which the idol is installed. It is among popular places to visit in Ahobilam.

Sri Karanja Narasimha kshetra is seen as the fifth kshetra and is unique in many ways. As you travel from lower Ahobilam towards Upper Ahobilam one would come to the place where Sri Kaaranja Narasimha is. The shrine is situated at a distance of one kilometre from the Upper Ahobilam, six kilometres from lower Abhobilam and one furlong from the road leading to Lower Ahobilam. The place gets its name ‘Kaaranja’, as it is in the midst of forest ofPunga (Honge) tree and ‘kaaranja’ in Telugu means ‘punga’ in Tamil. The image of the deity is installed under this tree,called ‘Kaaranja Vruksham’. Sri Narasimha of this place
thus came to be known as one who resides under the Kaaranja tree – Sri KaranjNarasimha. The temple set on a picturesque backdrop with Garudathri Mountain and is very pleasing to the eyes. It is located on the banks of Bavanashini River that presents an added beauty to the atmosphere and calms one’s mind.

Here, the idol holds a bow, which in the uniqueness of the idol. According to legend, Lord Hanuman has meditated here and when Narasimha appeared, Hanuman refused to recognize his god in any form but Rama. As per the wish of Hanuman, Narasimha has appeared in Rama’s characteristic weapon, the bow.