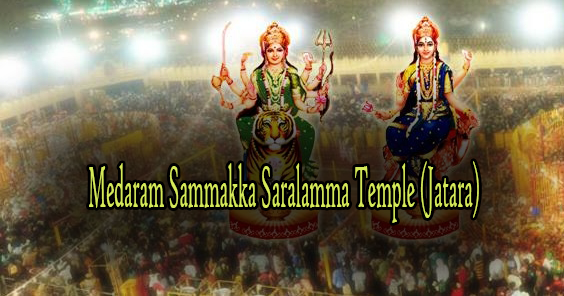 Medaram Samakka Sarakka Jatara is a Tribal Festival being celebrated in Medaram Village, started 31 January. The village Medaram is located in Tadvai Mandal at a distance of 110KM from Warangal city, State of Telangana, India.

Day 1
The First Day of Medaram Jatara is celebrated as the arrival of Goddess Sarakka. Sarakka will be brought from Kanneboyina Palli( a neighbouring village in the forest) in the evening and placed on Gadde, the Sanctum Sanctorum of this Jatara.

Day2
Thhe second day of Samakka Saralamma Jatara is celebrated as the arrival of Goddess Samakka the presiding deity of Medaram Jathara. The Goddess will be brought from Chilukala Gutta in the evening and will be placed on Holy Gadde. Normally, the Goddess is in the form of Vermilion.There are two Gadde’s (an earthen platform raised under the tree) separately one for Goddess Samakka and other for Goddess Sarakka. The Tribal priest brings Bamboo Sticks and placed on Gadde. The Goddess are represented by Bamboo Sticks smeared with Turmeric (Goddess Sarakka) and Vermilion (Goddess Samakka).

Day3
The most important day of the Jatara. On this holy day, Magha Suddha Pournima, the Goddess Samakka – Saralamm Darshan is available to Devotees. Devotees perform holy bath in “Jampanna Vaggu”( It is a tributary to river Godavari) and visit the Goddess to seek blessings of Goddess Sammakka and Saralamma.

Day4
The nal day of the Jatara – On this last day, the deities are taken back into the forest to the Goddess original places. This ceremony is called as “Vanapravesham”

The main deity(s) of the Sammakka Saralamma temple are two brave women who stood up for their community and its betterment. They became Martyrs in the battle. According to the legend, once a troop from the Koya tribal community was returning from a trip, when they saw a little girl playing with the tigress. The head of the troop saw the girl and inspired by her bravery, he adopted her and named her as Samakka. Later she married a headman of a neighboring tribal group and had a daughter, Sarakka. Both the mother and daughter protested the Kakatiya kings who forced the tribes to pay taxes. Both the women fought bravely and reportedly lost their lives. The Koya community constructed this temple as a token of gratitude. Annually an event called Sammakka Saralamma jatara is held which is considered as one of the largest tribal festivals of the world.

Sammakka is mother of Sarakka; both belong to the tribal community in Medaram village. In 14th century, Sammakka & Sarakka fought against Kakatiyas ruler Prathaparudra who tried to occupy the tribal territories. Finally, they lost their lives along with all their family members during the brutal fight.

The Sammakka Sarakka Jatara (Festival) is held to offer tribute to the brave mother-daughter warriors. Approximately 6 million people converge over three days around the small village of Medaram and its adjacent, Jampanna Vagu. This fair is said to be the largest repeating aggregation of tribal communities in the whole world.