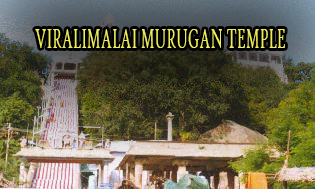 At a distance of 750 m from Viralimalai Bus Stand, 28 km from Trichy and 43 km from Pudukkottai, Viralimalai Murugan Temple is one of the famous Hindu temples dedicated to Lord Murugan, also known as Subrahmanya located in the town of Viralimalai in Pudukkottai District.

Sages and saints were in the form of Kura trees and worshipped the Lord of Viralimalai. Hence this place was called Viravi Malai which later became Viralimalai. The poet Saint Arunagirinathar has mentioned in his songs about saints staying and worshipping Lord Muruga in this hill temple.

Saint Vashishtar’s wife Arundhati forgets to feed Lord Murugan when he was born at Saravana Poigai. Due to this her husband cursed her. In turn Vashishtar was cursed by Lord Murugan for the ill fate he brought on his wife. As per mythology both Vashishtar and his wife Arundhati prayed here in Viralimalai to ward off their curse. Saints like Kashyapa Munivar and Naradar are believed to have offered their prayer here in Viralimalai to ward off curses.The representative of the Palayamkarar Karupamuthu Pillai used to visit the temple every Friday.

During one such visit, due to heavy rains there was flood and tanks bunds were broken. The river Mamundi was also flooded and Karupamuthu Pillai was cut off from the mainland. He neither had food to eat nor cigars to smoke and was in great misery as he was a chain smoker. Lord Murugan appeared before him, gave him cigar and matchstick and also took him to the temple for darshan. From that day cigar is offered to Lord Murugan along with neiveidyam and given away as prasadam to devotees.

Built by Aditya Chola in 9th century, this temple is located in the heart of the Viralimalai town. The temple lies on the Viralimalai hill, hence the town takes the name of the hill. This hill is small and rocky and there are 207 steps to reach the temple. On the way to the top, there are beautiful mandapas for devotees to rest.

The surroundings of this temple is filled with thick vegetation. This temple is specially known for the peacocks that are found in plenty. Within the premises of the temple, there is a statue of Kashyapa and Narada Muni along with several sculptures of Arumugan and Arunagirinathar on its pillars. At the foot of the hills the water tank called Saravana Poigai. On the eastern side there is a shrine for the goddess Maikannudaiyal. It is customary to worship this goddess before climbing up the hill. On the way to the hill there is a small cave temple for Meenakshi Sundreshwarar and a Mandapam called Sandana Kottam at the end of the steps.

The main idol Lord Murugan inside the sanctum sanctorum is impressive. The Lord is in the form of Arulmugan, six-faced and with twelve hands seated elegantly on the peacock facing east. The divine consorts Valli and Devayani stand on either side. The devotees can see the three faces at the back in the mirror while the other three can be viewed directly. Cigar made of sandal paste is a unique offering to the lord at this temple.

According to history, during the reign of Ramachandra Thondaiman of Pudukottai the Lord is believed to have appeared in his dream and requested the offering of cigars for the Kalasandhi and Sayaratchai puja. The king is said to have been cured of his diseases after the offer of cigars to the Lord according to history. There are several caves in which saints and yogis have performed penance.

According to one story, there was a Kura tree in the place where now the temple
exists. A hunter was chasing a tiger. It disappeared at this spot. It was believed
that Lord was there where the tiger disappeared and people began their worships.
Lord Muruga showed the way to Viralimalai to Saint Arunagiriar who was coming
from Vayalur and also taught him the rare eight miracle arts-Ashtama Siddhis. This
is a Muruga temple that has 18 Tirupugazh hymns sung by Arunagiriar.