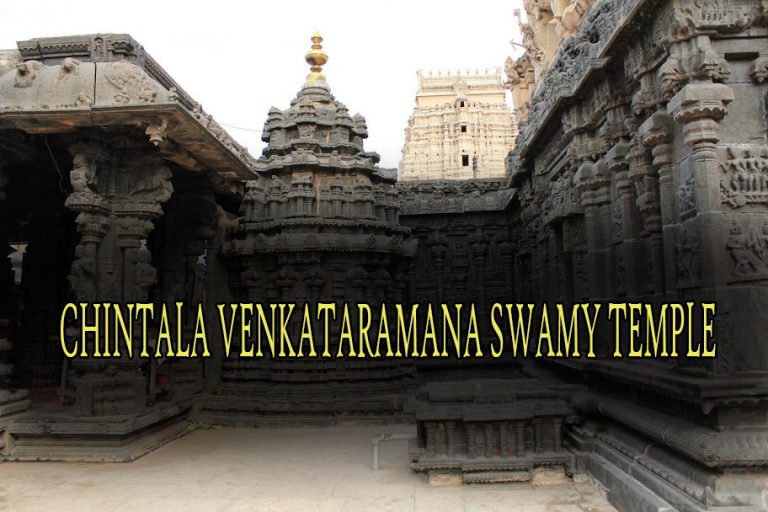 Chintala Venkataramana Swamy Temple Tadipatri is located within the Town. This temple is dedicated to Lord Maha Vishnu which stretches on 5 acres within the town and was built on the banks of Penna river.This Temple was built during the times of Vijayanagar dynasty and had a glorious time.

The town of Tadipatri is a veritable pilgrimage place, with a number of ancient temples to its credit. Right in the centre of this pilgrim town is the Chintala Venkitaramana Temple. Tadipatri or Tadpatri as it is called is a city in the Anantpur District in the state of Andhra Pradesh. This city is famous for gold after Prodattur. People flock to the town to purchase gold because of its purity.

Like the other towns and hamlets in and around Anantpur district, Tadipatri, too has its own slice of history.The temple is right in the heart of the city and has a lofty gopura. The temple is essentially a Vishnu Temple built according to Vaasthu Shilpa. It is stated that the temple was built by Sri Thimma Naidu under the orders of the Vijayanagara kings.It was built in the mid 16th century. It is situated in 5 acres of land. The temple is dedicated to Lord Vishnu and is being looked after well. An earthquake had destroyed the main gopuram but has been rebuilt recently. The carvings of episodes of the Ramayan, Mahabharatha and Bhagavatha are seen around the Garba Griha, Madhya Ranga,the Astana Mandapa, the Antarala Gopura, the Prakara, the Yagnasala and the Kalyana Mantapa.The carvings are so explicit and they express the story. There is an underground tunnel from this tunnel to Gooty Fort which has been sealed by the Archaelogical Department.

The region around Chintala Venkataramana Temple experiences an extreme type of climate and hence, the temperature remains above the mean level during the summer season. However, if you love exploring the history of any place irrespective of weather, time and conditions, then this marvellous temple is a year-round destination for you. If you are looking to visit it as a tourist, then the best time is from October until the end of March.

Why You Should Visit This Temple?

Unless you show zero interest towards the splendours of ancient India, Chintala Venkataramana Temple is your destination. From beautiful architecture to interesting history and alluring surroundings to a charming environment, there is a lot to enjoy here. You can also visit its nearby temples, such as Bugga Ramalingeswara Swamy Temple. Wouldn’t you love to learn a few chapters of the Indian history through this temple? If yes, then you shouldn’t visit this temple as a tourist but as a traveller and as an explorer.

This temple is believed to have been built in 16th century by Timma Naidu, son of Ramalinga Naidu, a chieftain of Vijayanagar Kingdom. It was built during the same time as the Vittala Temple of Hampi in a similar manner. Most of the features of these two temples bear close resemblance to each other, being built on a similar ground plan. While the stone chariot here is compact and small in size when compared to the famous stone chariot at Hampi.

Originally the temple was called Chintala Tiruvengala Natha Swamy Temple. Spread across 5 acres of land, this temple is built according to the Silpa Sastras. The carvings of episodes of the Ramayana, Mahabharata and Bhagavatha are seen around the Garba Griha, Ranga Mandapa, Mukha Mandapa, Main Gopura and the Prakaraa.

The Mukhamandapa has forty pillars in the Vijayanagar style. Beyond the Mukhamandapa is a Rangamandapa, which has scenes of the Ramayana and rare sculptures of the Vishnu avatars. The idol of Lord Venkataramana Swamy is very beautiful and is a classical master piece of the Vijayanagar Kingdom. There are two other temples inside the complex, one dedicated to Goddess Lakshmi and the other to Lord Anjaneya. There is a secret underground passage which believed to be leading to Gooty Fort. Currently, the tunnel is closed by the ASI. There is also a Thulabharam pillar, a typical trademark of the Vijayanagar culture. Inside the temple, every wall is covered with beautiful and delicate carvings of gods and puranic scenes.

The raja gopuram faces the east and is a solid structure, built using stone and brick. The stone part contains figures of Vidyadhara, Apsaras and Avatars, Elephants, Horses arrange in different levels.

The important festivals held in this temple are Diwali, Ramanavami and Brahmotsava that falls in the month of October.

Morning pooja and arati starts from 06:30 AM onwards