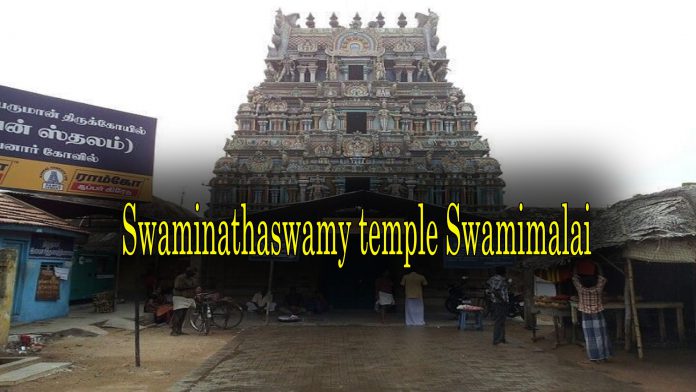 Swamimalai Swaminathaswamy Temple is a Hindu temple located in Swamimalai dedicated to Murugan 5 km from Kumbakonam on the banks of a tributary of river Cauvery, 250 km from Chennai, the capital of Tamil Nadu, India. The temple is one of the six holy shrines of Murugan called Arupadaiveedu. The shrine of the presiding deity, Swaminathaswamy is located atop a 60 ft (18 m) hillock and the shrine of his mother Meenakshi (Parvathi) and father Shiva (Sundareswarar) is located downhill. The temple has three gopuram(gateway towers), three precincts and sixty steps and each one is named after the sixty Tamil years. The temple has six daily rituals at various times from 5:30 a.m. to 9 p.m., and three yearly festivals on its calendar. The annual Vaikasi Visagam festival is attended by thousands of devotees from far and near.

At a distance of 9 km from Kumbakonam and 37 km from Thanjavur, Swamimalai, situated on the banks of river Cauvery, is known for Sri Swaminatha Swami Temple dedicated to Lord Murugan. Swamimalai is famous for being one of the six Padai Veedugal (Battle Camps) of Lord Murugan, the others being Thiruparamkundram, Thiruchendur, Palani, Thiruthani and Pazhamudhircholai.

The temple of Swaminatha is very ancient one and believed to be existed before 2nd century BC. It is said that Parantaka Chola I upgraded this temple. The temple was greatly damaged during the Anglo-French war between Hyder Ali and British in 1740.
The presiding deity Lord Murugan is depicted here as expounding the meaning of Pranava mantra ‘Aum’ to his father Lord Shiva. According to legend, Brahma disrespected Murugan at the time of visiting Mount Kailash. The child Muruga got angry with Brahma and asked him how he was creating living beings. Brahma said that he was creating with the help of the Vedas. On hearing the reply, Muruga asked Brahma to recite the texts from Vedas. At that time Muruga stopped Brahma and asked him to explain the meaning of the Pranava Mantra. Brahma could not reply and hence Muruga got him imprisoned and took up the role of the creator. Devas requested Shiva to negotiate with Muruga to release Brahma.

Shiva came to Muruga and asked him to release Brahma from imprisonment. Muruga refused to release him stating Brahma was unaware of the meaning of the Pranav Mantra. Shiva asked Muruga to explain the meaning and Muruga explained it. Thus Lord Muruga got the name Swaminatha, meaning the Teacher of Shiva. The temple is built on a hilltop with three gopuras and three enclosures. The first enclosure is at the base of the hill, the second halfway up the hill and the third at the top surrounding the sanctum.

There are sixty steps and each one is named after the sixty Tamil years. The central shrine houses the 6 feet tall granite image of Swaminathar. There is a shrine of Vinayagar outside the first enclosure which has the images of Dakshinamurthy, Durga, Chandikeswarar and the festival image of Lord Swaminatha. Shiva Linga and Meenakshi are located downhill. The second enclosure houses a marriage hall and the chariot of the temple.