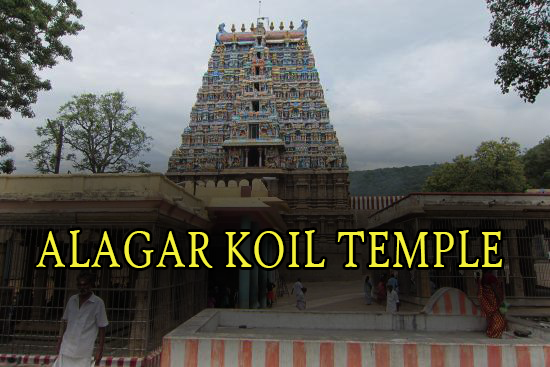 ALAGAR KOIL TEMPLE Located 21 kms northwest of Madurai is a Vishnu Temple on a picturesque wooded hill.Here ‘Vishnu’ presides as Meenakshi’s brother ‘Azhgar’. During the Chitrai festival in April/May, when the celestial marriage of Meenakshi to Sundareswarar is celebrated, Azhagar travels to Madurai.

Travel Tips: Pazhamudhir Solai (4 Kms) can be visited along with place

At a distance of 21 km north-east of Madurai, Alagar Koil is a beautiful temple dedicated to Lord Vishnu situated on a picturesque wooded hill. It is one of the major temples in Tamilnadu and an important pilgrimage site near Madurai city.

The temple is the abode of Lord Vishnu and is the sacred place for several followers of Lord Vishnu in the region. It is situated in the Alagar hills and is also known as Azhagar Kovil. Here ‘Vishnu’ presides as Meenakshi’s brother ‘Azhagar’. The statue of the lord is made of stone and is a great masterpiece created from kallalgar. Several different statues in different postures of the Lord are all kept in the temple under the same roof and it is the best form of distinct temples in southern India.

The impressive main tower at the entrance is believed to have been built by the Pandyan Kings. Jatavarman Sundara Pandyan (1251-1270 AD) has beautified the ‘vimana’ with gold plates. Later, during the reign of the Vijayanagar king Krishnadeva Raya, the temple has received good funding for conducting regular festivals.

A gold processional icon called the Sundararajar is carried by devotees in procession from Azhagar Kovil to Madurai for wedding ritual.Palamudhirsolai, one of the six abodes of Lord Subramanya is on the same hill, about 4 kms. above. A natural spring called Nuburagangai where pilgrims bath, is located here.Alagarkovil, a village situated very near Madurai at the foot of the range of hills called Alagarmalai, is famous for its ancient .

Vaishnavite temple, and the beauty of exquisite sculptures in the hall and other ‘mandapams’ of the temple. The Alwars have sung in praise of the deity of the place and the hills. In addition, Nakkirar, the Tamil poet has composed several popular poems about this deity. As the place itself suggests, the temple is dedicated to Alagar who is popularly known as Sundararajar. It is said that Alagar kovil attracted pilgrims even in the early days of the Sangam age.