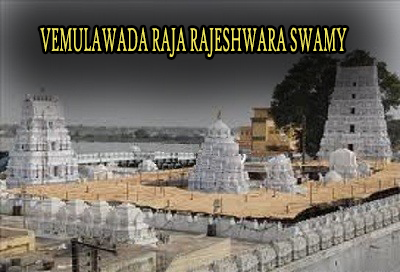 Vemulawada Sri Rajarajeshwara Temple is one of the oldest abode of Lord Shiva in Telangana.Vemulawada was once the Capital of Chalukyas called “Chalukyas of Vemulawada”.The present temple was constructed by the Chalukyas who ruled the Karimnagar region from 750 AD to 973 AD.

DAILY PUJAS AND SEVAS OFFERED TO THE DEITY

Note: During Mondays which are not covered with the Thithi i.e., Eakadasi, Dwadashi, Sankramana, Masa Sivarathri, Bahula Astami etc., Eakantha Seva would be performed to the deity.

Note: During Monday and other peak days when the inflow of pilgrims is at very high side Kode Mrokkubadi Puja would be started at 4.30 AM for the convenience of the pilgrims.

At a distance of 36 km from Karimnagar, 127 km from Nizamabad and 151 km from Hyderabad, Vemulawada is one of the most famous pilgrimage sites in Telangana and also one of the popular one day trip from Hyderabad.

Shri Raja Rajeshwara Swamy temple is one of the ancient and famous Shiva temples in the Andhra Pradesh. The shrine in the temple is famous for the architectural grandeur and spiritual sanctity and is one of the famous Shaivite temples in Andhra Pradesh State. The presiding deity of the temple is Lord Raja Rajeshwara in the form of “Neela Lohitha Shiva Linga” known for his boundless benevolence in fulfilling the wishes of the devotees.  This shrine of the temple is popularly known as  ‘Dakshina Kasi’  and also as “Harihara Kshetram” ,  there being two Vaisnava temples in main temple complex.

Bhavishyothara Purana mentions that the Sun-God [Surya Bhagavan] recovered from disability by praying at the shrine here and so this shrine is termed as “Bhaskara Kshethram”. Indra- the King of Astadikpalaka by devoutly worshipping Lord Shri Raja Rajeshwara-the presiding deity of the shrine, purified himself from Brahmahatya Dosham.

Vemulawada is famous for the temple of Rajarajeshwara Swamy, an incarnation of Lord Shiva. It was built by one of the governors of Kalyani Chalukyas by name Rajadithya between 11th and 12th centuries. The presiding deity is locally popular as Rajanna who is accompanied by the idols of Sri Raja Rajeswari Devi and Siddi Vinayaka. It houses several temples dedicated to other deities including Anantha Padmanabha Swamy, Bhimeshwara Swamy, Kodanda Rama and Kasi Visweswara. Apart from these there is a tomb of Muslim saint.

Located on the banks of Mulavagu stream, Vemulawada was once the capital city of Vemulawada Chalukyas dynasty between 750-973 CE. The remains of the temples and sculptures show the great architecture of Chalukyas. There are several inscriptions available that refer the reign of Chalukyas. It was earlier known as Lemulavatika, Lembulavade, and finally transformed into Vemulawada.

According to the legend, Lord Siva after having stayed aKashi, Chidambaram, Srisailam and Kedareswar chose to reside at Vemulawada. Vemulawada was ruled by the dynasties of Ikshwakus, Satavahanas and the Chalukyas who made it their state capital. The place is also associated with the 11th Century Telugu poet, Vemulawada Bheemakavi.