Simhachalam is one of the 32 Narasimha temples in Andhra Pradesh which are important pilgrimage centres. It was regarded as an important centre of Vaishnavism in the medieval period along with Srikurmam and others. The temple has been recognised by historians with the help of a 9th-century AD inscription by the Chalukya Chola king KulottungaAt a distance of 18 km from Vizag Railway Station & 128 km from Annavaram, 208 km from Rajahmundry, 359 from Vijayawada, 607 km from Hyderabad, Simhadri or Simhachalam is a Hindu temple located in the Visakhapatnam City suburb of Simhachalam in Andhra Pradesh. This 11th century temple is dedicated to Sri Varaha Narasimha Swamy, an incarnation of Vishnu and situated on top of the Simhachalam Hills.

The temple is believed to have been constructed in 1098 by the famous Chola king, Kulothunga Chola. The queen of Kalinga gifted golden armor to the statue. The Eastern Ganga King Narasimha Deva has constructed the central shrine in 1267. Krishna Deva Raya, the Vijayanagara Emperor visited this temple in the year 1516, as seen from inscriptions here. The temple activities are managed by the Pusapati Gajapatis, for last three centuries.

The architectural of the central shrine follows Kalinga style. Facing towards west, it is a square shrine surmounted by a high tower, a portico in front with a small tower, a carved 16 pillared Natya mantapa. The shrine has inscriptions dating back to 1098 AD on its walls. The deity is always kept covered with sandal paste. The actual form of the deity is in the tribhanga posture with two hands & head of a lion, which can be viewed only during the ‘Chandanotsavam’ in April/May. Legend has it that the Ugra form of Narasimha as he killed the demon Hiranyakashipu was so fierce that the image is kept covered by sandal paste throughout the year.

The temple is one of the eighteen Narasimha Kshetras in India. The artwork here has elements of similarity with that of Konark. Elephants, flowers and plants are portrayed in the carvings. The outer walls of the sanctum depict images of a royal personality (said to be King Narasimha) in various postures. This temple also boasts of a beautiful stone chariot drawn by horses. This is one of the richest temples in Andhra Pradesh.

Millions of devotees from around the country visit this temple every year especially during the Chandanotsavam Festival Season. On the annual ritual Chandanotsavam day, the Lord is covered with a new fresh layer of Sandalwood.

Road access is available to the hill top. Pilgrims can also take up the steps path to reach the temple. Simhachalam Devasthanam runs Simhadri Bus Service to take pilgrims to the hill top from the foothill.

A shrine which follows strict discipline, the Simhachalam temple has detailed prayer routines for all days of the year which are undisturbed by the influx of pilgrims. This place is a treasure of traditional Vaishnavite culture, and you can study the same in the routine of the temple and the various inscriptions that it houses. Interestingly, the statue of the deity appears in its true form only for 12 hours per year on the day of Akshaya Tritiya. On any other occasion, the idol is covered with sandalwood paste. Simhachalam Temple has been a source of inspiration to many poets such as KuchimanchiTimma Kavi, Adidam Sura Kavi and the likes, owing to its rich history and strong traditional values. 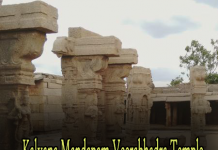 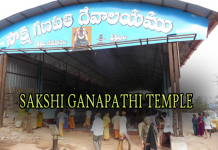 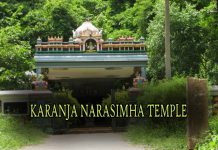