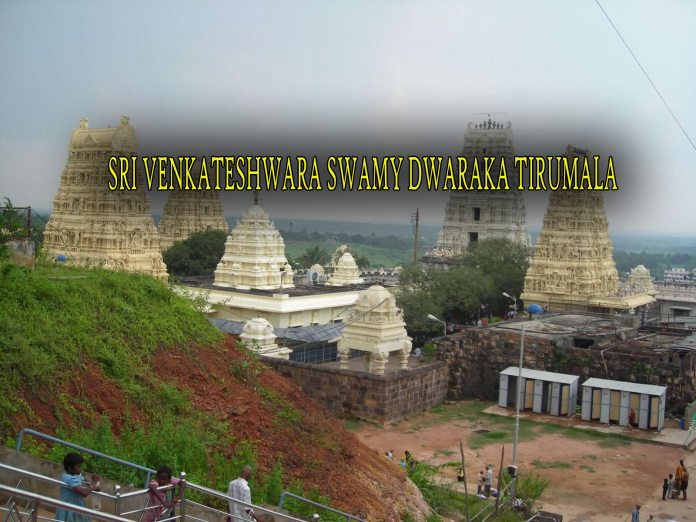 Dwaraka Tirumala is a famous temple from the ancient times. According to some Puranas, the temple is popular even in Kruta yuga and is still attracting the devotees.At a distance of 1 km from Dwaraka Tirumala Bus Stand, 45.5 km from Eluru, 73 km from Rajahmundry, 101 km from Vijayawada, 135 km from Kakinada and 278 km from Visakhapatnam, Sri Venkateswara Swamy Temple is located on the top of the Seshachala Hill at Dwaraka Tirumala in West Godavari district of Andhra Pradesh. This temple is considered as sacred as the famous Sri Venakteswara Temple of Tirumala.

The statue of the lord is visible above the waist and the lower portion is imagined to be in the earth. The holy feet are said to be offered to Bali Chakravarthi in Patala loka for his daily worship. The full size idol of Lord Venkateswara standing at the back of the main idol is said to have been installed by the great social reformer Ramanujacharya in 11th century. These two idols are located in the same sanctum sanctorum which is a unique feature of this temple. The idols of Goddess Padmavathi and Nanchari are installed in the Arthamandapa.

The region covered by our Dwaraka Tirumala is commanding the top most conspicuous position in India, being garlanded by these two great Indian rivers Krishna and Godavary, as pointed out by Brahma Purana.

Temple Activities for the day:

This temple is a masterpiece of South Indian Architecture with its five-storied main Rajagopuram facing the south and three other gopuras on the other three sides. There are several temples of Alwars attached to the Prakara on all sides. There are other shrines in the temple, Lord Anjaneya Swamy, Garuda, Saint Dwaraka and image of Sri Tallakapaka Annamacharya.
Another interesting feature of the temple is that the hill appearing to be a serpent in form.

Brahmotsavam (around May) and Vaikunta Ekadasi (Dec/Jan) are celebrated grandly in the temple. The Tiru kalyanotsavam is celebrated twice a year.

Seeghra Darsanam: This is a Special type of Darsan. People can use this type of Darsan having shorter period of time. Darsanam timings are Morning 6AM to 1 PM, 3 PM to 5.30 PM and 7.00 PM to 9 PM.

Arjita Kalyanam will not be celebrated on the following Days: