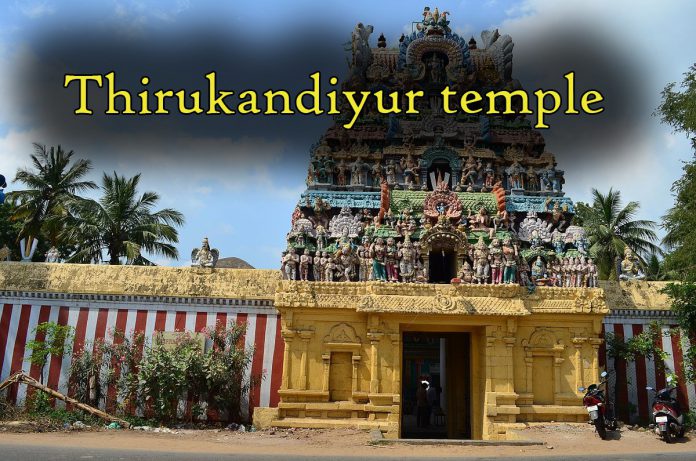 Thirukandiyur divya desam is around 10 kms from Tanjore and about 4 kms from Tiruvayaru. The Lord here is called Sri Hara Saba Vimochana Perumal. The temple is situated between Kudamurutti and Vennar rivers, has got two prakarams(corridors around the temple). It has a three-tier Rajagopuram facing east.

Travel Tips: Thiruvaiyaru (4 Km) can be visited along with this palce

At a distance of 12 km from Thanjavur and 35 km from Kumbakonam, Thirukandiyur is a temple town situated in Tamilnadu. The major attraction of Thirukandiyur is the Temple of Hara Sapavimochana Kandeswarar. The temple of Thirukandiyur is considered one of the 108 Divyadesams and is also known as Pancha Kamala Kshetram. As per history, the temple was built by Emperor Mahabali and is located between Kudamurutti and Vennar Rivers.

This temple is an excellent specimen of Dravidian style of architecture. It has a three-tiered Rajagopuram facing East with two enclosures. The main diety Hara Sapavimochana Perumal is in standing posture in the sanctum sanctorum. There is a beautiful pond called Kapaala Theertham situated on the western side of the temple. Just opposite to it is the Padma Theertham, there are shrines for Goddess Kamalavalli, Lord Narasimhar, Sudharsanar, Andal, and the Azhwars in outer enclosure.

The complex also has a temple for Lord Shiva, known as Kandeswarar Temple. The place has the reputation of being honoured as Trimoorthy Sthalam. Since there is no temple for Brahma, he can be seen in Kandeswarar temple gracing with Goddess Saraswathi. It is believed that devotees visiting the temple will be freed from all their sins.

The Brahmotsavam festival is being celebrated in Tamil Month of Panguni. The temple was renovated due to the efforts of Sreemadh Andavan Sri Rangaramanuja Maha Desigan.

The legend behind the temple is that Paramewaran (Shiva) plucked the fifth head of Brahma and hence was cursed with Brhamahathi dosham. The skull of Brahma was stuck in his hand and could not get rid of it. As per his curse ,unless he filled the skull with rice by way of alms, he will not be able to get rid of the skull. He went around asking for ‘bikshai’ ( begging for food) and it never got filled. He approached Lord Vishnu and Mahalakshmi filled the kabalam (skull) with rice and got filled. As he went around asking for bikshai, He is also called as ‘Pikshandavar’.However, the skull stuck to his hand did not fall off. Lord Narayana asked him to go to ThiruKandiyur to completely get rid of the curse. Hence Shiva went to Thiru Kandiyur to Kamala pushkarani and took a bath and got rid of the saabham (curse).After that this pushkarani came to be known as Kabala theertham.