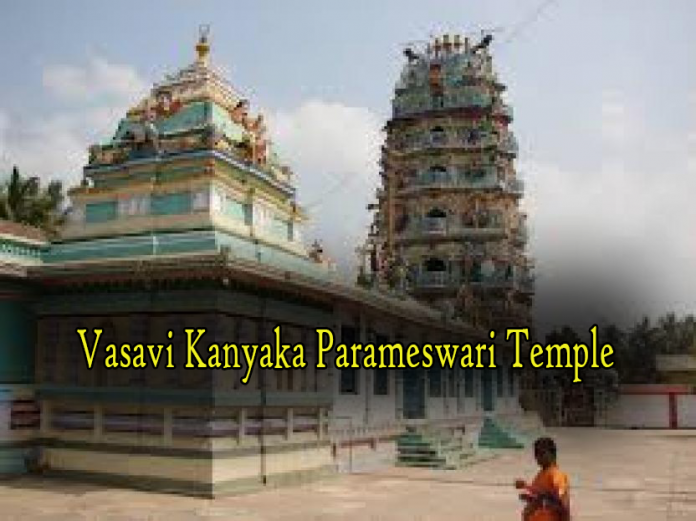 The land of Vysyas with its capital Penugonda, known as garden of peace plunged in sorrowDuring the middle of tenth century, the two tall temple gopurams of Sri Nagareswara and Sri Janardhana exhibited the tolerance and amnity between the two great religions Saivism and Vaishnavism. It was during this time; Kusuma Sresti was ruling the city of Penugonda. His rule was considered as a golden era. His wife was Kusumamba, they were an ideal couple and great devotees of Sri Nagareswara. Penugonda was a part of Vengidesha, which was ruled by Challukya King, Vishnu Vardhana.
They had spent many happy years of their married life, but had a worry because they didn’t had any children. They performed putrakameshti yagam and were blessed by Goddess Sarvani with twins, a boy and a girl. Twins were born in the month of vaisaka at twilight during coincidences of Uttara and Kanya nakshatra. They named the boy as “Virupaksha” and the girl as “Vasavamba”. Sri Baskaracharya was the teacher and guiding star of the community. Vysyas took his advice on religion, cultural and social matters. Under his guidance, Vasavi learnt all the fine arts and got mastery over philosophical subjects and Virupaksha learnt horse riding,martial arts,Vedas,fencing and other qualities to rule the country.
Once, Vishnu vardhana went trip to extend his empire. On the way, he visited city of Penugonda and was welcomed by King Kusuma Sresti. The people looked at him with awe and reverence. Among the crowd, Vishnu Vardhana spotted Vasavi who was glittering with her beauty after when Manmatha (god of love) threw his sweet arrows on him, which influenced him a lot. His hawkish eyes again and again sought for the enchanting figure of Vasavi. He made up his mind to marry her and sent his ministers to talk to Kusuma Sresti.
Kusuma Sresti was neither in a position to accept nor to deny. He could not show any anger or disturbed mind and told the ministers that Vysya community has certain norms to follow regarding the marriage of its daughter. The minister’s response is that the king wanted to marry Vasavi and that should take place. He consulted with the Vysya elders to discuss the situation. They all decided to give most importance to the views of Vasavi. She expressed her feelings to be a virgin throughout her life and intended to meditate upon endless problems.
The King Vishnu Vardhana rose into anger when heard the denial of Kusuma Sresti to give his daughter. As a result, he sent his big army to attack Penugonda and to get Vasavi. There was a big fight and the brave Vysyas defeated Vishnuvardhana’s army by using the techniques of Sama, Dhana, Veda and Dhanda. At this stage, Vasavi decided to enter the Homagundam to stop the atrocities. She indicated she will be the first one to enter the homogundam and others may follow her, such a noble act will glorify the peace loving Arya Vysysa sect of generation.
On the banks of Godavari, 103 Agnigundas were constructed and then filled it with sandalwood, ghee and herbs was spread in to that. Everyone decided to act in accordance with Vasavi. The couples of 102 Gothras were joining Vasavi to plunge into the holy fire.All the people realized that Vasavi was the incarnation of Goddess Parvathi. Vasavoi smiled and revealed her true self the Vishwa roopa dharsan of Kanyaka Parameswari, the incarnation of Dharmaraksha and Ahimsa.
When Vasavi entered the homagundam of raging fire, suddenly the fire became a cool breeze and Agni Deva came out with folded hands and said that he could not bear Vasavi who was hotter than him. Vasavi told Agni Deva that she do not want to perform Agni pariksha, she would grow cooler to him and he can transport her and others to Kailash through her transplanatory prowess. She performed Agni Pravesam to reach kailash and others followed her.
After the sudden demise of Vishnuvardhana, his son Prince Rajaraja Narendra visited the land of Penugonda with a retinue of peace loving citizens. Vasavi was worshipped as Kanyakaparameswari. The first temple for Vasavi was built in Penugonda.

Famous Temple Near to Vasavi Temple: