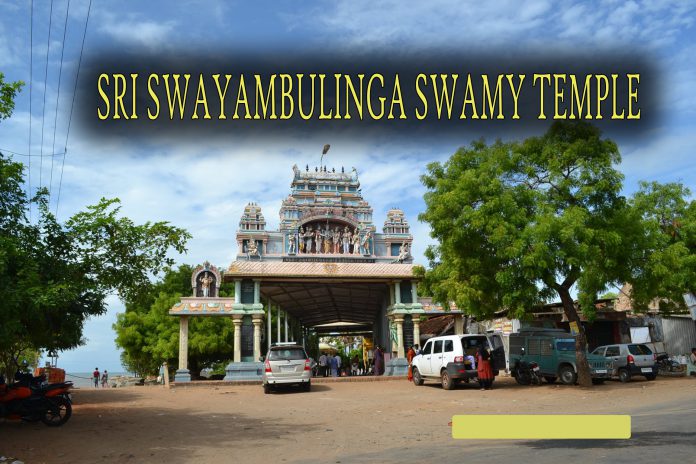 A milk vendor from Kootapanai was hit at a particular spot on his way through Uvari
to sell his milk. He cut the root of the Kadamba tree when it began to bleed. A
voice told the milk vendor that He was there and asked him to build a temple. The
milk vendor did so with palm leaves and in days that followed, the temple grew to
the present size. Devotees are happy that any illness of any nature is cured by the
Lord.

Of the 25 forms of Lord Shiva, Lingodhbava is one. Lord is a Swayambumurthi in
this temple. The beauty is that that Sun God performs abishek to Lord with His rays
on all the 30 days of Margazhi month – December-January. Though Sun worships
Lord Shiva in various temples polacing His rays, the duration is for a few days only.
This is the only temple where Sun rays fall on the Lord for the whole month.

Also, this is the only temple in Uvari where Mother Nature directly treats the Lord
with cool breeze. There are four springs on the sea shore which are pleasantly
palatable and considered the abishek theertha of the Lord. Every illness concerning
either the body or mind is cured by the Lord if the devotee sincerely prays to him.
The place is also a tourist destination.

Sri Swayambulinga Swamy Temple is dedicated to Lord Shiva. The main deity is Swayambunathar because he exists on his own. The Goddess in this temple is Brahma Sakthi. There are four springs near the sea shore, all with fine drinking water. The Kadamba tree is considered sacred here.

According to legend, there was a milk vendor who went a certain route every day. And on that route there was a root of the Kadamba tree that was obstructing his path. So one day he decided to cut the root and when he did that, he was taken aback to find blood flowing out of the root. He heard a voice from the sky saying that God was there and that a temple was to be built there. The milk vendor built a temple there with palm leaves and later a stone structure replaced this.

The 3 days Vaikashi Vishakam (May-June), Thai Poosam (January-February), and Panguni Uthiram (March-April) are the festivals that are celebrated here with great pomp and fervor.