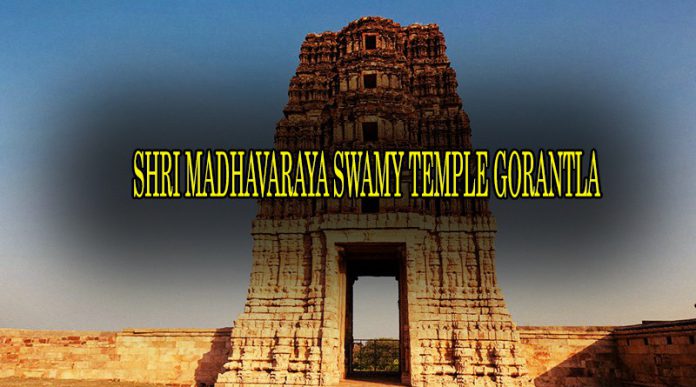 Gandikota Madhavaraya Temple is around 15 km from Jammalamadugu town and 77 km from Kadapa (formerly known as Cuddapah). Kadapa is around 275 km from Chennai (NH5), 276 km from Bangalore, and 400 km from Hyderabad.

Temple was built during by King Narasimha Saluva dynasty of the Vijayanagara empire in 1354 A.D.There is a maha mantap with magnificient huge Yaalis pillars in totally different style and the mantap pillars are carved with Maha Vishnu’s Dasa Avatharam and other deities too. The shrine has a ardha mandapam with pillar and ceilings with carvings, is enclosed within the walls. The Garbha Griha has a small image of Lord Madavaraya. The main attraction of this temple is the Maha mandapam with interesting scenes from Ramayana on the pillars. Large stepped well in font of the temple is another interesting place within compound.

According to the district gazette and the Mysore Epigraphical Report of 1912, the  temple was built by king Narasimha of the Saluva dynasty of the Vijayanagara empire in Saka 1276 (1354 A.D). Between the period (from 1610 A.D to 1904 A.D), the nose of the presiding deity (idol of Madhavaraya Swamy) was broken which had made the idol ineligible for puja. The temple was declared a protected monument by the British govt. With the nose of the presiding deity being chiselled away, the daily rituals have been eluding the temple.

The temple consists of a small shrine chamber, a large central hall enclosed with walls, and a large pillared mandapa in front. The most ornamental and interesting portion of the building is the pillared porch in front. The plain portions of the massive pillars are decorated with bas-relief sculptures representing scenes from Ramayana and Puranas. The entrances are richly carved with Vaishnava figures. The Garbha Griha has a small image of Lord Madavaraya. Large stepped well in font of the temple is another interesting place within compound. The historical site is full of sculptures and the Pillared Mandap is renowned for its numerous stone carvings.

Anantapur district is a district in the Rayalaseema region of Andhra Pradesh, India. The district headquarters is located at Anantapur city. Gooty fort was a stronghold of the Marathas, but was taken from them by Hyder Ali. In 1789 it was ceded by his son Tipu Sultan to the Nizam of Hyderabad.Anantapur is a major producer of Dolomite and Iron Ore minerals.Lepakshi, a village in Anantapur District famous for temple of Vijayanagara architectural style, Monolithic Lepakshi Nandi, and Hanging Pillar, Monolithic Naagalingam.

Madhavaraya Temple is now a historical monument and is noted for the imposing temple tower which can be seen from any corner of the village and the interesting and intricate sculptures of architectural value. The idol of the temple and many sculptures are destroyed during invasions but the ornately decorated mandapa is still intact. The carvings of fish and tortoise seen inside the dwaram (entrance) suggests the temple was once a shrine dedicated to Mahavishnu.