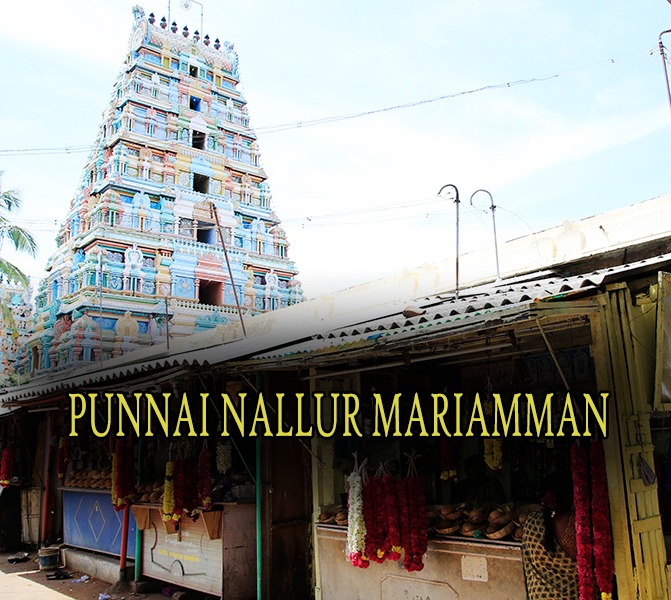 The Punnai Nallur Mariamman temple is an Hindu temple located at Thanjavur in the state of Tamil Nadu, India. The temple of goddess Mariamman is one of the famous temples around Thanjavur District.

At a distance of 6.5 Kms from Thanjavur town, the Punnai Nallur Mariamman temple located in Punnai Nallur village is one of the famous temples around Thanjavur District. The temple was build by Maratta rulers of Thanjavur.

In the year 1680, the Maratta ruler Venkoji Maharaja Chatrapati (1676 – 1688) of Thanjavur was on a pilgrimage to Samayapuram Mariamman near Thiruchirappalli. After he returned to Thanjavur, Mariamman appeared on his dream and mentioned that she is residing at the Punnai forest 5 km on the east direction of Thanjavur. The King went and saw a white-ant hill and started building a temple around it. The Maratta rulers Thulaja, Serfoji also contributed to construction of the temple.

Originally the Amman was in the form of white-ant hill. The Great saint Sadhasiva Brammendra swamy shaped the white-ant hill into a form of Mariamman and also installed a powerful Chakra.