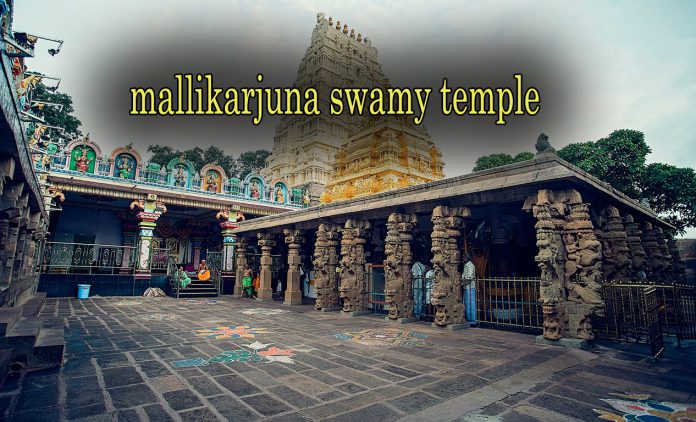 Mallikarjuna Swamy Temple at a distance of 1 km from Srisailam Bus Station, Mallikarjuna Swamy Temple dedicated to Lord Shiva has a great historical and religious significance and it is one of the 12 Jyotirlingas and also one of the 18 Sakti Peethas (Bhramaramba Temple situated in same complex). The holy temple is situated on a mountain named Shri Shaila on the banks of Krishna River. This Jyotirlinga is also referred as Kailash of the South. Mallikarjun Temple is among the prime places to visit in Srisailam.

The earliest known historical mention of Srisailam hill can be traced in Pulumavis Nasik inscription of 1st Century AD. The Sathavahanas, Ikshavakus, Pallavas, Vishnukundis, Chalukyas, Kakatiyas, Reedy Kings, Vijayanagara Emperors and Chatrapathi Shivaji are among the famous emperors who worshipped God Mallikarjuna Swamy and made several contributions to the development of the temple.

Prataparudra of Kakatiya Dynasty strived a lot for the improvement of this temple and granted Paraganas for its maintenance. The period of Reddy Kings is the Golden Age of Srisailam that all rulers of the dynasty celebrated service for this temple. In 14th Century, Prolaya Vema Reddy of Reddy Dynasty constructed stepped path-way between Srisailam and Pathala Ganga and Anavema Reddy constructed Veera Siromandapam.

Mallikarjuna Swamy Temple was built in Dravidian style with high operas on all sides of the temple. The sanctum is a shell like structure that enshrines Lord Mallikarjuna. The small black linga has a hooded golden cover. The garbha griha is small and only priests are allowed inside. It has a large idol of Nandi, facing the sanctum which presides over a pillared hall. The door to the sanctum is silver-plated. To its left is the idol of Ratnagarbha Ganapati and to the right are Veerabhadra Swamy and Bhadrakali. To the north of the sanctum are the five lingas installed by the Pandavas.

The temple is usually crowded on weekends. The festivals of Shivaratri, Dussehra and Karthika Poornima attract lakhs of devotees from all over southern and western India.Srisailam offers a vast array of moderately expensive to budget hotels run by Temple Board, AP Tourism and private operators. Advanced reservation is recommended during peak season, festivals and long weekend.

The best time to visit Srisailam is from September to March while the peak season is September to December & February to May. Usually it takes 1-2 days to visit major places in Srisailam.According to the legend that the temple houses, Goddess Parvati cursed sage Bringi to stand, as he only worshipped Lord Shiva. Lord Shiva, after consoling the goddess, gave him a third leg, so that he could stand more comfortably. Find the idol of sage Bringi standing on three legs here as well as idols of Nandi, Sahasralinga and Nataraja.
The walls and pillars of the temples are also adorned by beautiful carvings and sculptures. One of the most beautiful temples of the town, this is the one sacred structure, located on the Nallamala hills, that one should not miss while here.