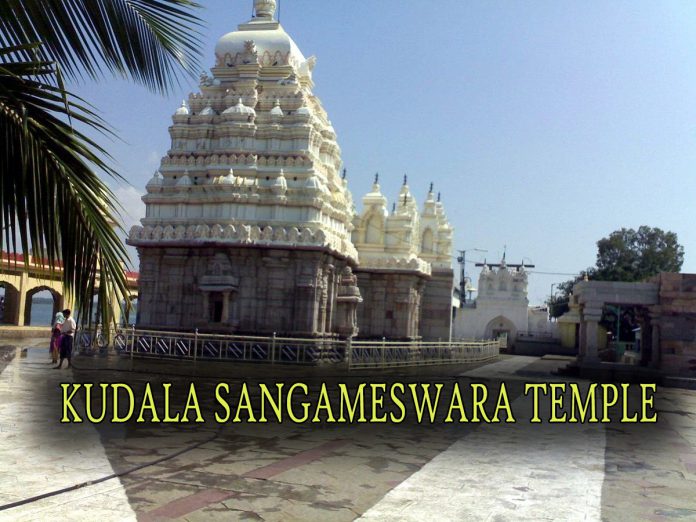 Kudalasangama is renowned for the ancient Shri Sangameshwara temple, which was built in the twelfth century by the Chalukya rulers. Originally this place was known as Kappadi Sangama.  Shri Sangameshwara temple is dedicated to Basaveshwara, a renowned teacher and poet,  born in the second century.  Kudalasangama was his place of birth and hence the Hindus believe that this as a very important site. The great ascetic was also known as Ishanaguru.

At a distance of 1 km from Alampur Bus Station, Kudala Sangameswara Temple is the most magnificent of the temples at Alampur. It was built in 740 AD by Chalukya ruler Pulakesi.

This is active temple with regular pujas being performed. There was a Marakata Linga found beneath the main shivalinga while moving the temple from the original site.

It is believed that in the 12th century Jathaveda Muni Sarangamath had established an education centre here and Basaveshvara, Channabasavanna and Akkanagamma were students. Basaveshvara spent his childhood here and in later years after marriage, he is said to have become one with the God at this place. The vachanas composed by him are dedicated to the presiding god here, Sangamanatha.

The place is a village concerning 19 kilometers (12 mi) from Hungund. Nearby is the holy pilgrim centre and the famous temple ofSangameshvara, on the stream bank, at the confluence of the Krishna and the Malaprabha rivers. Once it had been called Kappadi sangama where Basaveshwara’s teacher Ishanaguru lived.

The Kudala Sangameshwara temple consists of a structure, navaranga and the main shrine. The idols of Basaveshvara, Neelamma, Nandi and Ganapathi are placed in the navaranga. The door frame of the garbhagriha is richly carved with floral designs and animal figures. In the shrine, is the Linga famed as Sangameshvara or Sangamanatha. In front of the temple, on the inside of the stream, is a little stone mantapa with a Shivalinga in it, and lofty cement concrete dry wall has been built around it to protect it from submersion.

On the east, across the river Krishna, stands the Neelamma’s temple. She was the consort of Basaveshvara. He built a high cement concrete dry wall, designed round the structure to protect it from the waters. The temple of Shri Sangameshwara is full of beautiful stone carvings. The name Sangameshwara comes from the fact that this temple is situated on the meeting point of two rivers. This temple has intricate carvings and is a feast to the eyes.  The temple has a navagriha or the main temple and a porch. Animal figures and flowers have been inscribed on the doors of this temple.
An inscription in the temple of 1213 A.D., records a gift to the god Acheshvara. Another stone record of 1160 A.D. refers to land grants to deities, Kaleshvara and Achesvara.

Lord Basava the great prophet and social reformer was born in Bagewadi (Basavana Bagewadi), a small village in Bijapur District, in North Karnataka, also called Ingaleshwara Bagewadi.  Agrahara was an important place in town. The house of Madiraja, the chief of the township was situated here. Basaveshwara was born to Madiraja and Madambike on third day of Vyshakha month of Anandanama year in Rohini star, according to the Hindu calendar. (The year coincides with 1134 A.D.) Basavanna was a great saint; he is considered Guru by some and some believe in him as an incarnation of Nandi-  Lord Shiva’s greatest devotee.