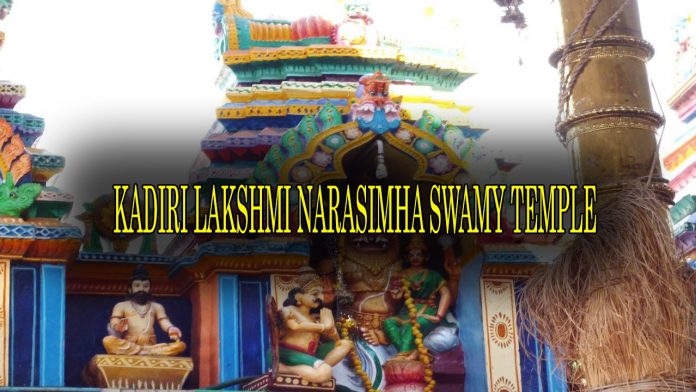 Sri Kadiri Lakshmi Narasimha Swamy Temple at a distance of 1.5 km Kadiri Railway Station, 100 km from Anantapur, 113 km from Kadapa, 458 km from Hyderabad, 476 km from Vijayawada, and 174 km from Bangalore, Sri Kadiri Lakshmi Narasimha Swamy Temple is located in Kadiri town in Anantapur District of Andhra Pradesh. The temple is dedicated to Lord Narasimha, a Man-lion form and is one of the 10 avatars of Lord Vishnu.

It is known from the inscriptions on the Temple walls, that Swamy appeared in the dream of Veera Bukka
Rayalu of Vijayanagar dynasty and revealed his whereabouts. King along with his staff then recovered the Idol (Saligramam) from the roots of the tree and built the temple.

Lord Narasimha in this temple is swayambhu emerging from the roots of Khadri tree (Indian mulberry). The specialty of this temple is that after the daily Abhishekam is performed, the idol of Lord Lakshmi Narasimha oozes sweat continuously even after repeatedly wiping off sweat by the temple priests.

The construction of this temple is said to have been commenced during the Western Chalukya rule but it was completed during the time of Vijayanagara rulers. The inscriptions in the temple relate mostly to the Vijayanagar period. One of them states that the temple was built by a Nayaka during the reign of Bukka I in 1332 AD. The raja gopuram was built by Harihararaya. The popular king of Vijayanagara Sri Krishna Devaraya and Maharashtra King Shivaji visited this famous temple and constructed sub temples and Mahishasuramardini Temple respectively.

The temple is enclosed in large walled compound with 4 entrances having a gopura over each entrance. On the eastern entrance one can see the idol of Anjaneya. Garbgriha is decorated beautifully with four lions in corner. There is an idol of Prahalada standing beside the lord. Sri Mahalakshmi, the Lords consort is known here by the name of Sri Amruthavalli. The procession image of the deity is in the form of Vishnu made of metal with Bhudevi and Sridevi on either side. The temple is facing east; with a large pushkarini (temple tank) in the north east corner of the temple.
Inside the temple, every wall is covered with beautiful and delicate carvings of gods and puranic scenes.

Annual chariot festival or Rathothsavam is conducted every year in this temple in grand manner. On this holy day a huge Chariot with Lord Lakshmi Narasimha presiding in it is pulled by hundreds of devotees on the streets. Lakhs of devotees attend this Rathothsavam to participate in the festival.

Accommodation at reasonable rates is available in temple premises and is managed by temple administration.