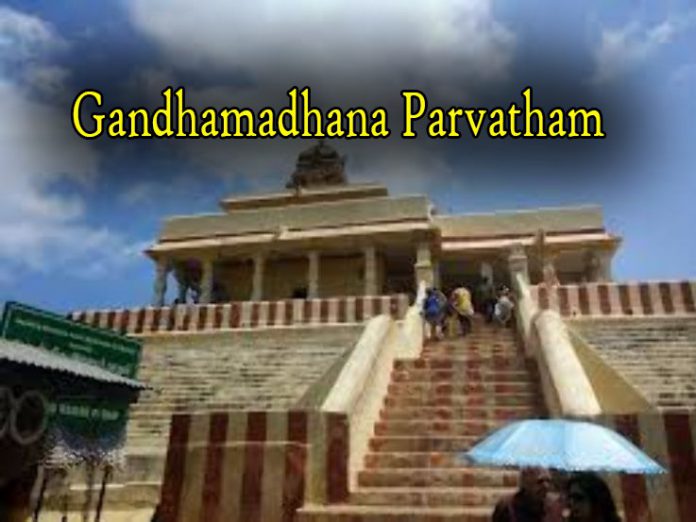 Gandhamadhana Parvatam is located towards the north-west of Rameshwaram and is famous for its beautiful sunrise and sunset. It is a holy place for the pilgrims, who come to worship Lord Rama’s footprints, which can be seen within the premises of the shrine.

At a distance of 3 km from Rameshwaram Railway Station, Gandhamathana Parvatham is the highest point in the island.

There is a two storeyed Mandapam, where Rama’s feet (padam) is found as an imprint on a chakra. Pilgrims visit in thousands to worship Gandhamathana Parvatham. Sukreevar Temple and Theertham are situated on the way to Gandhamadana Parvatham.

Mt. Gandhamadana is believed to be the hillock from whose summit, the Hindu god Hanuman commenced his flight to Ravana’s Lanka. Kalidasa [Kumarasambhava, VI] refers to Gandhamadana, in the vicinity of the mythical city of Osadhiprastha in Himalaya Mountain, having Santanaka trees.

Nath tradition holds that Parashurama, after enacting his vengeance, sought out Dattatreya atop Mount Gandhamadana for spiritual guidance. Their conversations gave rise to Tripura Rahasya, a treatise on Advaita Vedanta. It was here the deity instructed the warrior-sage on knowledge of scripture, renunciation of worldly activities, and non-duality, thus freeing Parashurama from the cycle of death and rebirth.