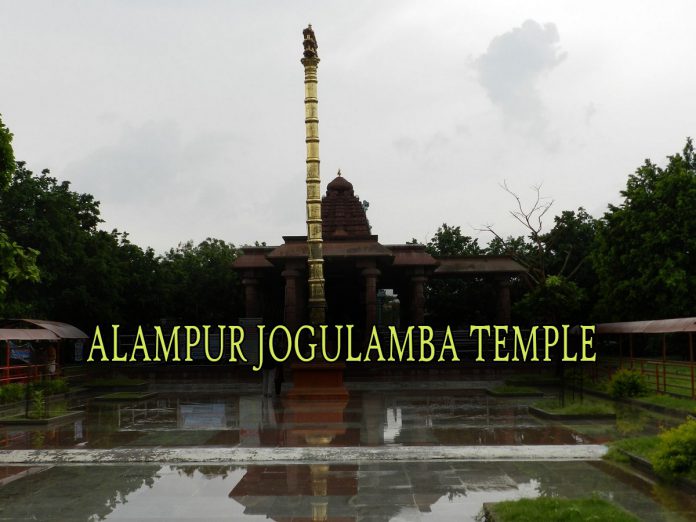 At a distance of 218 kms from Hyderabad, 22 Kms from Kurnool, 126 Kms from Mahbubnagar & 200 kms from Srisailam, Alampur is a historical place located in Mahbubnagar district of Telangana. Alampur is famous for Jogulamba Temple (a Shakti Peetha), Navabrahma temples and Sangameswara Temple built in 7th century. Alampur is considered as the western gateway to the famous pilgrimage town Srisailam. The temple consists of several inscriptions dated between 7th and 16th centuries. Alampur is one of the famous places to experience Telangana tourism.

The Sacredness of Alampur Temple is mentioned in the Skanda Purana. It is said that Alampur is the western gate of Srisailam which is one of the most significant of the 12 Jyotirlingas. It is mentioned that Brahma performed a strict penance here for Lord Siva. Lord Siva appeared before him and blessed him with the powers of creation. Therefore, the name Brahmeswara. Here in this shrine goddess Parvati is known by Yogini or Jogulamba.

One day while the King was wandering in the forest in search of food and water, he came across a hunter who offered him some food. The hunter went into the forest in search of food. He saw a deer and tried to kill it. The deer requested him not to kill and told him that it would come back after feeding its young ones. The deer also told the hunter to believe in its words and that if it did not act up according to its words, it was prepared to suffer the same sin as that of King Vilasat who ruined Siva temples. The hunterleft the deer and told this to the King. The king followed the hunter and came to see if the deer would
come back. The deer, which came back as per its words, on seeing the King Vilasat, turned its face awayfrom the King, saying that it would not see such as sinful man. The king repented for his sins and begged the deer to tell him as to how he could get rid of them. The deer told the King that he should go to Brahmeswara Kshetra and do penance there for some time and rebuild all the temples. On one of the sculptures of the temple, this story is depicted. The deer also told him that by the time when the image of the King on the stone becomes spoiled in courses of time, the king would be relieved of the greatest sin.