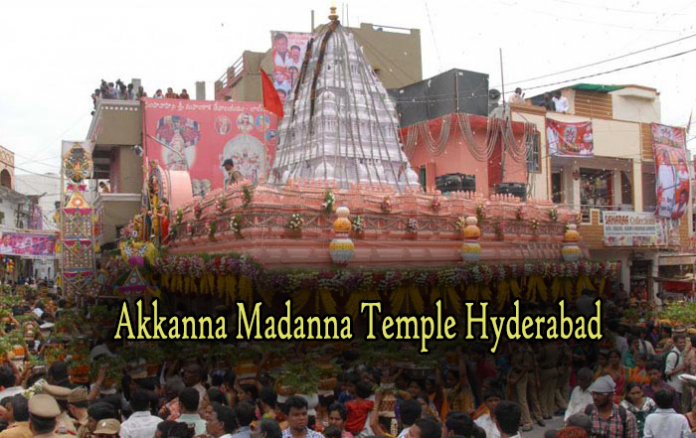 Akkanna Madanna Temple is a traditional Hindu temple of Goddess ‘Mahankali’ located in Shalibanda, Old City, Hyderabad. This temple is known for the celebrations of Bonalu festival in Hyderabad. This temple was constructed by two Bharmin brothers ‘Akkanna’ and ‘Madanna’ during the time of Sultanate of Golkonda. (1674 to 1685).

Festivals: During Bonalu Festival, especially during the procession of Ghatam.The Temple is open on all days of the year.

The two brothers were killed during the war with Mughal Army. Akkanna Madanna are still remembered in Telangana Region as great martyrs and administrators. Akkanna, Madanna are the uncles of Bhaktha Ramadasu, who constructed Lord Sri Rama in Bhadrachalam.

Procession of ‘Ghatam’ at this temple is very important event which happens during Bonalu festival.

Bonalu festival celebrations at Akkanna Madanna Temple will not until the repairs and whitewash of the Dargah (white is opposite to the temple) is completed.