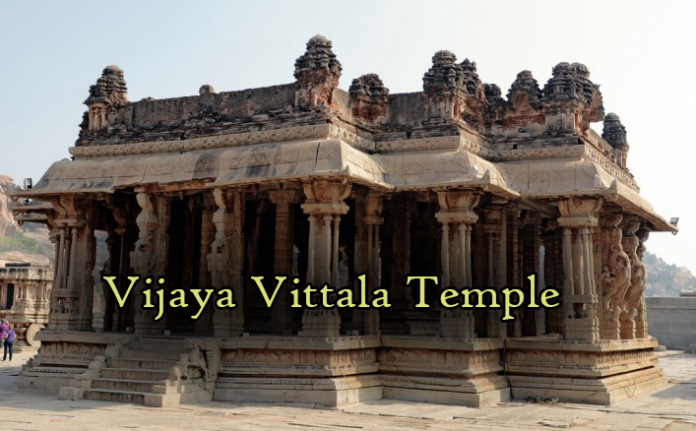 Vittala, after whom the temple is known, is a form of lord Vishnu. This aspect of Vishnu was worshiped in this part of the country as their cult deity by the cattle herds (see Gods of Hampi).

Travel Tips: Vittala temple is the venue of the annual Purandaradasa festival in January/February.

At a distance of 9 km (or 2.3 km by walk) from Hampi Bus Stand and 5.5 km from Kamalapura Bus Stand, Vittala Temple is an ancient monument located on the southern bank of the Tungabhadra River. It is one of the largest and the most famous structures in Hampi. This temple is famous for Stone Chariot and Musical Pillars and is among prime place to visit on a Hampi trip.

The Vijaya Vittala or Vittala Temple is the most famous and popular tourist attraction in Hampi. It was built around 15th century AD during the reign of King Devaraya II (1422 – 1446 AD). Several portions of the temple were expanded and enhanced during the reign of Krishnadevaraya (1509 – 1529 AD). This temple is dedicated to Lord Vishnu in the form of Vittala. The temple is well-known for its exceptional architecture and unmatched craftsmanship. This predominant monument of Hampi is a major attraction of Hampi and is a must see for visitors.

The temple is built in Dravidian style and stands in a large rectangular enclosure. The three lofty Vijayanagara towers on the east, north and south are now dilapidated. The entire complex houses several temples, enclosures, pavilions and halls.

In front of the temple is the world famous stone chariot or ratha. This is one of the three famous stone chariots in India, the other two being in Konark and Mahabalipuram. It originally enshrined Garuda, the vehicle of Lord Vishnu. The chariot, built on a rectangular platform, is built out of giant granite blocks. All around the base of chariot is carved with mythical battle scenes. A series of concentric floral motifs adorn the wheels of the chariot. The wheels of the chariot can be rotated but the ASI cemented them to avoid the damage caused by the visitors. Two elephants are positioned in front of the chariot but originally there were two horses positioned here.

The complex contains four large mandapas. The south, north and the east ones are still intact. The central western hall is collapsed during the attack of Deccan Sultanates that led to the downfall of the Vijayanagara Empire in 1565 AD. The main mandapa contains 56 musical pillars, 40 of which are regularly disposed to form an aisle while the remaining 16 form a rectangular court in the center. These musical pillars are also known as SAREGAMA pillars, indicating the musical notes emitted by them. The musical notes are emanated when the pillars are tapped gently.

The other attractions in this temple complex are the Goddess’s shrine, the 100-pillared hall, the Kalyana Mandapa and the pillared corridor all around the enclosure wall.