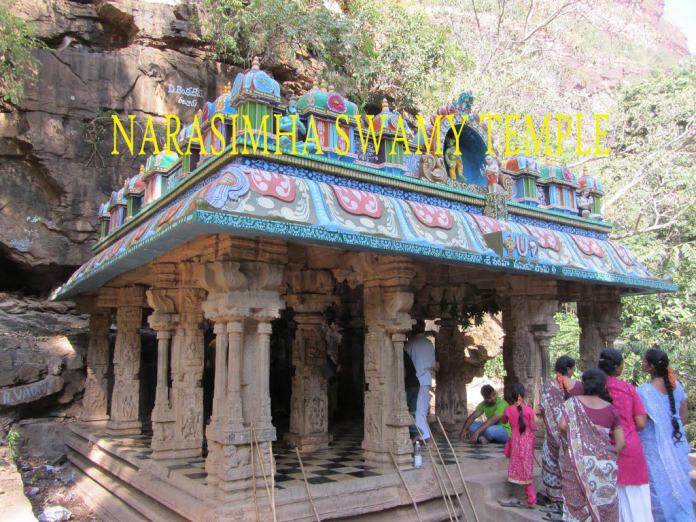 Ahobilam is the holy abode of Lord Narasimha, an incarnation of Lord Vishnu in man-lion form. According to legend, this is the place where Lord Narasimha killed Hiranyakasipu and saved Prahalada. Though the initial temples were built by Chalukyas in 8th century, most of the current structures were rebuilt by Vijayanagara kings around 15th century.

Ahobilam is a small town and food is available at small hotels and canteens. There is a Brahmana Nitya Annadana Satram in the Upper Ahobilam where food is provided daily for nearly 400 people. In addition, Sri Ahobila Matham has established a trust called Annamacharya Nitya Annadana Trust. Food is provided free of cost to the devotees of Sri Lakshmi Narasimha Swamy.

Brahmothsavam is celebrated in the month of February to mid-March. All the 9 shrines can be visited in 2 days with help of guide.

Hyderabad Airport is the nearest airport, 333 km from Ahobilam. Nandyal Railway Station is the nearest railway station, located 66 km away from Ahobilam. It is connected to major cities like Howrah, Hyderabad, Bangalore, Goa, Machelipatnam, Vijayawada, Hubli, Puri, Vizag and Bhubaneswar. Ahobilam is very well connected by bus with nearest town Allagadda (25 km). There are state buses available from Chittoor, Nandyal, Kadapa, Hyderabad, Tirupati, Nellore, Chennai and Kurnool for Allagadda.The best time to visit Ahobilam is from October to March while the peak season is from February to May. Usually it takes 1 day to visit Ahobilam.