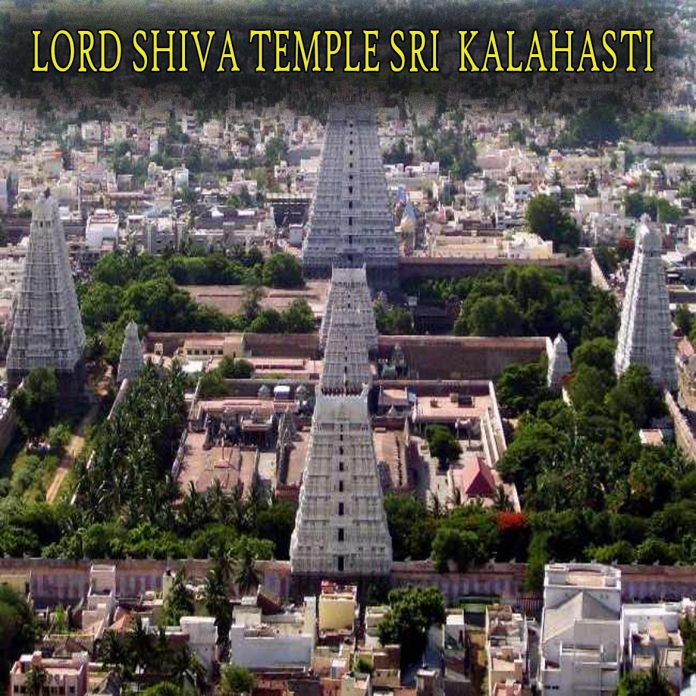 Srikalahasti got its name from three words – ‘Sri’ meaning a spider, ‘Kala’ meaning a serpent and Hasti meaning an elephant, as these three creatures are believed to have worshipped Lord Shiva at this place and attained salvation. It is located on the banks of the River Swarnamukhi, which is a tributary to River Pennar, one of the major rivers in South India. The ancient Shiva temple of Srikalahasti finds reference in the three ancient epics the Skanda Purana, Shiva Purana and the Linga Purana. According to Skanda Purana Arjuna came to this place to worship Kalahasteeswara (Lord Shiva) and met Rishi Bharadwaja on the peak of a hill. Ideal Trip Duration: 4 Hours/Half Day

The temple of Kalahasteeswara is one of the most impressive Siva temples in India. This temple features 120 feet high enormous and ancient gopuram over the main gate. The entire temple is carved out of the side of a huge stone hill. The initial structure of this temple was constructed by Pallava kings in the 5th century. Chola kings renovated the temple and constructed the main structure in 10th century. The outer walls and the 4 gopurams were constructed in the period of Sri Veera Narasimharayar of Vijayanagara kingdom. The main gopuram and the 100 pillar mandapam were constructed by Krishna devaraya, the great Vijayanagara king in 1516.

On all the days in a year, the Pooja is performed from 6:00am to 7:00pm except on the day of Maha Shivaratri. It is belived that the most important days to perform Rahu-Ketu  Pooja are Amavasya day in a calendar month and Sunday Amavasya.

Devotees who are willing to perform the pooja shall purchase the tickets available at Temple Ticket Counters in the Temple premises. The tickets rates are Rs300, Rs750 and Rs1500. Pooja Vidhanam is common for all ticket holders. The details are as follows.

Sri kalahasti is regarded as one of the Pancha Bhoota Sthalams of Lord Shiva; the other four includes Tiruvannamalai, Thiruvanaikaval, Chidambaram and Kanchipuram. The place is representative of the Vayu Sthalam or the Element of Air. This temple is also associated with Rahu and Ketu, two of the nine celestial bodies in the Indian astrological scheme. It is believed that a visit to this temple will provide relief to those who have the planet Rahu in inimical positions in their horoscopes.

This small town is dotted with many small and big temples; most of which were constructed during the reign of Pallava, Chola and Vijayanagara kings. Srikalahasti is associated with Bhakta Kannappa, one of the greatest devotees of Lord Shiva how offered his eyes to the lord. The festival of Maha Shivaratri is celebrated with great zeal in February to March.