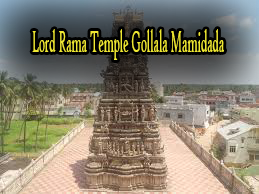 Archanas or regular Pooja is conducted at the temple daily. The ceremony of Abhisheka is conducted as enlisted in the sashtras and thousands of devotees from all over the region make it a point to attend the Pooja festivities. Devotees have a firm belief in Lord Rama and make vows to return to the temple, once their wishes are fulfilled. Executive officer has been appointed by Government of Andhra Pradesh to look after the affairs of the temple since 1991. Prior to that, the management of the temple was being looked by the family of late Sri Kovvuri Basivi Reddy Garu.

Gollala Mamidada (East Godavari): Sri Kodanda Rama temple, which is located at Gollala Mamidada village in East Godavari district, was decked up on the eve of Sri Rama Navami festival. The temple houses the idols of Lord Rama, Goddess Sita and Lakshmana. The temple has an impressive Gopuram which is at a height of over 170 feet. Gollala Mamidada is a well-known place in the district where Srirama Navami will be celebrated in a grand manner. The temple was constructed in 1889 by Dwarampudi Subbi Reddy and Rama Reddy. Celestial wedding of Lord Rama and Sita will be performed at the temple on April 19 on a grand scale. The Kalyanam attracts thousands of devotees as Gollala Mamidada is also known as Chinna Bhadradi. The nine-day celebrations will start on April 19, according to temple authorities. Elaborate arrangements have been made for the devotees to protect them from scorching summer heat. Notably, Ms Dwarampudi Mahalakshmi is the acting hereditary trustee of temple.

The Kalyanam of Sita and Rama will start at 12 noon followed by chariot procession and other ceremonies. The Kalyanam here is popular after Bhadrachalam Kalyanam. Hence, scores of devotees throng the temple to witness the celestial wedding. East Godavari Collector Neetu Kumari Prasad, Anaparthi MLA Nallamilli Sesha Reddy along with their spouses will offer silk clothes to the presiding deities on the occasion. Therefore, devotees arrive at the more than 100-year-old temple on Thursday night. The temple committee made arrangements accordingly. The committee will organise ‘Annadanam’ for the devotees on the occasion. The speciality of the festival is the celebration of ‘Ooyala Seva’ and ‘Sri Pushpa Yagam,’ which will be conducted on a grand note. The Kalyanam will be performed under the supervision of temple main priests Rejeti Venkat Kurma Ranganathacharyulu, Rejeti Narsimhacharyulu and Ponduru Satyanaranacharyulu of Kakinada Notably, the devotees believe that their wishes would be fulfilled if they witness the Kalyanam and childless couples would beget children.