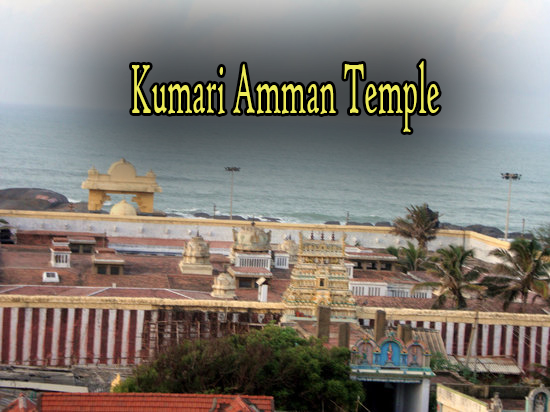 The 3000 year old Kumari Amman temple at this place is dedicated to Virgin Goddess Kanyakumari, who stands in eternal vigil protecting the country, is surrounded by a stone wall and stands on the edge of the ocean. The entrance to the temple is through the northern gate, while the eastern gate always remains closed except on some festival days, when deity is taken out for the ceremonial bath. The deity is facing the east.

Goddess Kanyakumari has the legendary account that once Banusura, the demon king got supremacy over Devas and meted out cruel punishment to them. The Devas performed a Yagna pleading to annihilate the evils. Goddess Parasakthi came to Kumari in the form of a virgin girl and began her penance. Meanwhile Lord Shiva fell in love with her and arrangements for the marriage were made in the midnight a particular day. Now the Devine sage Narada realised that their marriage would destroy the chances of annihilating Banusura because he could be killed only by a virgin. When Lord Shiva was on his way to Kanyakumari from Suchindrum at Valukkamparai 5 kms south of Suchindram, Sage Narada assumed the form of a cock and crowed falsely heralding the break of dawn. Thinking that the auspicious time for the marriage was past, Lord Shiva returned disappointed. The Goddess too decided to remain virgin after that. Then, when Banusura attempted to win the Goddess by force, she killed him with her Chakragudha, and relieved the suffering s of Devas. Then she resumed her penance and remained virgin.

The Devi stands as a charming young girl in her penance with a rosary in her right hand, and a sparkling nose jewel that sheds lustrous radiance. It is believed that the nose ring of Devi Kanyakumari set with rubies are so bright and that could be seen from far at night. Also it is told that some ships sailing in the sea, mistaking the brilliance of the rubies for the light from the Lighthouse , went off shore got wrecked, hitting against the rocks nearby. In this point of view eastern side gate of the temple is kept closed. The idol made of blue stone, is believed to have installed by sage Parshurama.

After worshipping the Goddess, pilgrims enter the inner corridor, where they can have the darshan of Indra Vinayak. There is also a small shrine dedicated to Tyaga Sundari.

The black stone image of Kanyakumari in the sanctum bearing a garland is an enchanting one. Of particular significance is the glittering nose ring that is visible from a distance. The Vaisakha festival is celebrated in the tamil month of Vaikasi where an image of the goddess is taken around town. An image of the deity is held in worship at the Navaratri mandapam throughout the duration of Navaratri.