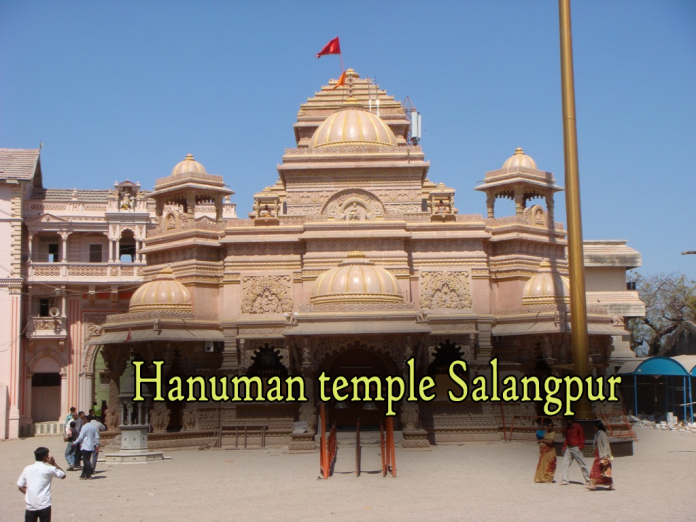 Sarangpur also known as Salangpur houses the only Swaminarayan temple enshrining Hanuman as its chief deity. Sarang in Gujarati means Peacock. The Hanuman Darshan statue at the Sarangpur Hanuman Temple is a figure handlebar moustache, crushing a woman demon under his foot, that is standing among sculpted flora full of fruit bearing monkey followers.

At a distance of 6.5 km from Nizamabad Bus Station, Sarangapur Hanuman Temple is situated at Sarangapur is another important pilgrim site in Nizamabad district.

Hanuman Jayanti Mahotsav: Hanumath Jayanti is celebrated to commemorate the birth of Hanuman, the Vanara god, widely venerated throughout India. It is celebrated with great enthusiasm and spirit among the devotees of Lord Hanuman. Devotees from all over the country visit the temple to offer the prayers and to perform the rituals. The devotees visit temples and apply tilaka of sindoor to their foreheads from Hanuman’s idol as Hanuman. The event is celebrated on the 15th day of the Shukla Paksha, during the month of Chaitra

Sundar Kand: Sundar Kand is celebrated in the month of October or November. It is a book that depicts the adventures of Hanuman. Sundara Kanda is the only chapter of the Ramayana in which the hero is not Rama, but rather Hanuman. This lesson is recited by religious Hindus, preferably on Tuesdays or Saturdays, these days having been earmarked for special prayers to Hanuman.

Holi: Holi is a two-day festival which starts on the Purnima. The first day is known as Holika Dahan or Chhoti Holi while the second day is known as Rangwali Holi, Dhuleti, Dhulandi or Dhulivandan. The festival signifies the victory of good over evil, the arrival of spring, end of winter. It is also identified as a festival that celebrated agriculture, commemorated good spring harvests, and the fertile land. Devotees arrive at the Sarangpur Hanuman Temple to celebrate this festival of colors.

Mangla Aarti: The word Mangla means auspiciousness.  “Jai Kapi Balvanta” is the Aarti of Sarangpur Hanuman Temple. The Mangala Aarti or Aarti is done by waving a piece of lighted camphor in circles around an idol of God. The Deities offer the first darshan of the day, signifying the auspicious beginning of the day for devotees. It is performed early in the morning and devotees gather together to attend it.

Shangar Aarti: Shangar aarti is the aarti that is performed every Tuesdays and Thursdays in the morning. Shangar means adornments. During this aarti, the Deities are dressed and adorned.

Rajbhog Aarti: During the rajbhog aarti, the darshan is closed for the devotees. The deities are offered with the royal offerings of the midday meal.

Sandhya Aarti: This aarti is performed during the evening depending upon the timings of the sunset. Devotees gather to seek the darshan of the deity and offer their prayers.

Shayan Aarti: After the Shayan Aarti, the darshan is closed for the devotees. It signifies that the Deities are about to retire for the night.

It is believed that the deity gives immense mental and physical strength to the devotees. According to the history, the foundation stone of this shrine is believed to be laid by saint Samartha Ramadas, who was the guru of the great Indian leader Chatrapati Shivaji.
The temple is located on the top of a hill with large open area. A garden is also being developed in the temple premises.

Lord Hanuman Jayanti and Ramanavami festivals are celebrated here in grand scale. Large number of devotees visit this temple on these days.