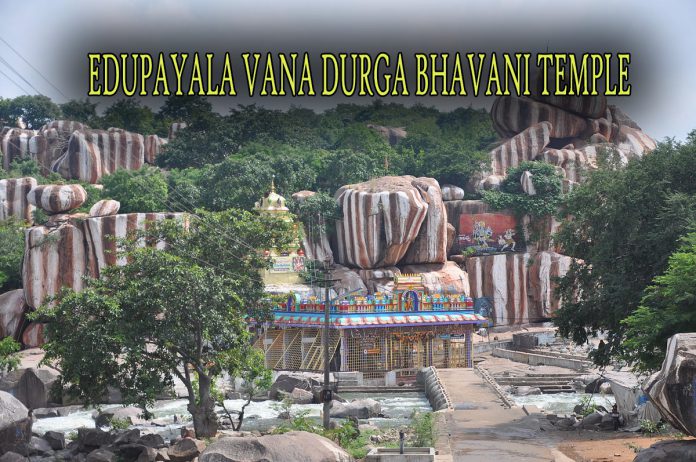 Edupayala Durga Bhavani Gudi is located at the confluence of seven streams. The shrine of Durga Bhavani which is the presiding deity of the temple is the most beautiful in the area. It is also known to be the most famous and powerful in the whole of Telangana area.

Special attractions:
– In addition to the Edupayala Jathara which is held during Shivrathri the Durga Bhavani temple is also famous for the other festivals that are held here namely, the Navarathri Uchavalu and the Magama Amvasya.

At a distance of 3.5 km from Nagasanpally, 19 km from Medak Bus Station and 110 km from Hyderabad, The Temple of Sri Edupayala Vana Durga Bhavani is located near Nagasanpally in Medak district of Telangana. This is one of the popular pilgrimage sites to visit around Medak & Hyderabad and also one of the famous one day trip near Hyderabad.

he specialty of this temple is it is formed with the names of seven sages who are famous in the Indian mythology and the names are Jamadagni, Atri, Kasyapa, Viswamitra, Vasistha, Bharadwaja and Gowtama and a feast is celebrated every year during the time of Shiva Ratri and the name of that feast is Seven Payala jaatara.

This temple is formed in the 12th century. The goddess Durga (Vanadurga) is originated first in the Paapanna Pet Mandalam at Nagsanpalli region out skirts. The feast is celebrated for one week every year starting from the Shiva Ratri season. Once upon a time this area is very silent with no population and human being wandering there but after the origin of this Durga temple, the Seven branches of river Manjeera became very famous with a number of devotees. The idol of the goddess is situated in the middle of these 7 rivulets 3 front and four back.

The festival begins on the day of Sivaratri and is followed by Bandi Utsavam where hundreds of decorated bullock carts from 32 villages go around the temple and concludes with the rathothsavam. Every year, around thirty lakhs of devotees worship the Goddess Durga. To watch this occasion the devotees not only from our country come here but from various parts of the country come to worship goddess Durga. The Manjeera River which had its origin at Beedar and flowing at Medak and Nizamabad districts is acting as the sub division of the river