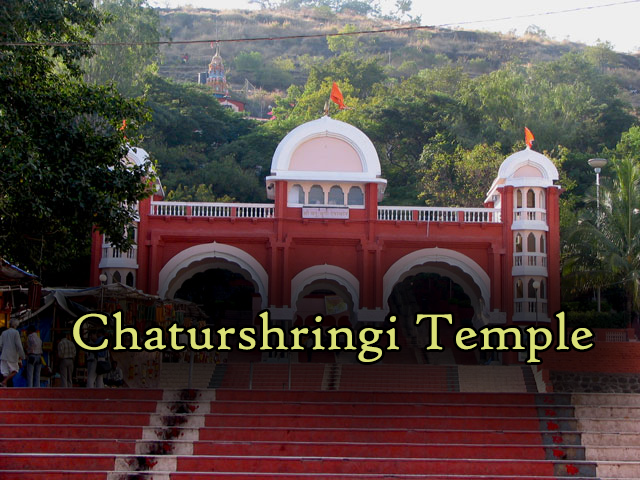 The Chattushringi Temple also spelt as Chattushrungi Temple is a Hindu temple in the city of Pune in Maharashtra state of India. The temple is located on the slope of a hill on Senapati Bapat Road. It is said to have been built during the reign of the Maratha king Shivaji.

At a distance of 6 km from Pune Junction, Chaturshringi Temple is a Hindu temple located on the slope of a hill on Senapati Bapat road in Pune. It is one o fthe best places to visit in Pune.

The temple opens at 6.00 A.M and is open till 9.00 P.M In the temple, one can find the idols of Goddess Ambareshwari, Durga, Laxmi, Vishnu and there are also miniature idols of Ashtavinayak Ganeshas. During Navratri, the temple is very beautifully decorated. The best time to visit this temple is during Navratras.

Main attraction of the festival is the procession of carrying out the silver statue of goddess Chaturshringi in a silver chariot, which is held in the evening on the tenth day (on Vijaya Dashami/ Dassera) of the festival.

Chaturshrungi is the name of a mountain with four peaks. The temple is 90 feet high and 125 feet wide and is a symbol of power and faith. One has to climb more than 100 steps to reach the shrine of Goddess Chaturshringi. There are also temples of Goddess Durga and Lord Ganesh in the temple premises. This Ganesh shrine includes eight miniature idols of Ashtavinayaka and these small temples are located on four separate hillocks.